Our History and Our Hopes

Whether it’s extraordinary shows drawing sold-out crowds, countless programs integrating the arts and academics or the engagement activities that take Wharton Center into the community, our work is driven to enrich lives and strengthen the value of the arts in everyday life.

Since that first night in 1982, Wharton Center has generated state and national prominence for its success with touring mega hits and sold-out sensations, as well as commissioning new works by up-and-coming artists, opening the door to a new generation of performers and patrons. 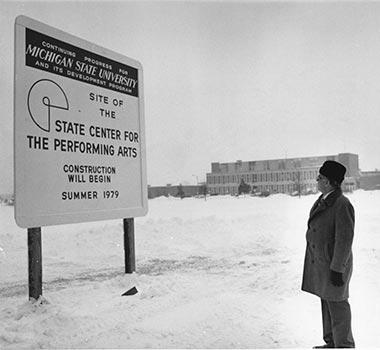 The iconic MSU Auditorium had been the home of performing arts on campus since 1939, when First Lady Eleanor Roosevelt attended its opening ceremony. Originally constructed as a multi-use facility, the space also needed to host college dances, commencements, speakers, and the Farmers’ Week convention.

That made it slightly less hospitable to performers, in particular those such as violinist Jascha Heifetz, soprano Beverly Sills and the Berlin Philharmonic.

Conversations began as early as the 1950s regarding a dedicated performing arts facility. But it wasn’t until Dr. Clifton R. Wharton Jr. arrived to serve as MSU president from 1970-78 that the dream began to take shape.

Dr. Wharton was instrumental in driving a fundraising campaign for the proposed facility, working to raise more than $1 million from campus organizations to launch the effort. The plan was to raise $11 million for the construction; the project ultimately cost $24.6 million. 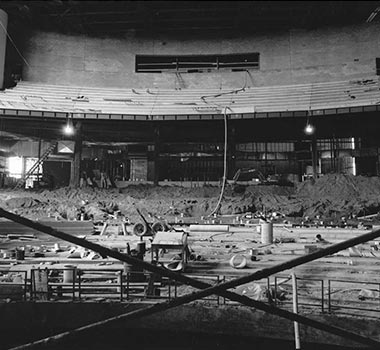 Ground was broken in 1980, during Dr. Cecil Mackey’s tenure as MSU president, with roughly half of the funds for the project secured.

Fundraising efforts continued, and construction on the center began. Caudill Rowlett Scott design architects of Houston, and the architects and engineers from Harley Ellington Pierce Yee of Southfield both contributed to the design of Wharton Center. Construction was led by the Christman Co. of Lansing.

The MSU Board of Trustees voted to name the facility the Clifton and Dolores Wharton Center for the Performing Arts. “Dolores and I were deeply touched by the board’s action,” Dr. Wharton wrote in his book, Privilege and Prejudice: The Life of a Black Pioneer. “We loved Michigan State and the performing arts. Now, the two strands of our affection were permanently entwined, and the university would have a cultural showcase that could stand proudly with its other centers of excellence.” 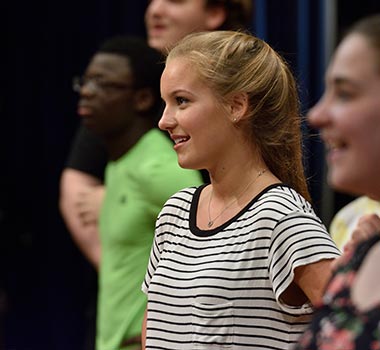 Wharton Center’s story encompasses much more than a long list of impressive performances that have graced its stages.

Arts education and engagement are at the heart of our work, taking Wharton Center out into the community to connect with students, teachers and families, and creating unique programs to offer access to all kinds of audiences. Projects include Eye for Broadway—bringing the performing arts and visual arts together in the classroom; NextGen@Wharton; Sensory-Friendly Performances; and the many Wharton Center Institute for Arts & Creativity programs.

This sense of connection—to community and to ourselves—is essential to our core belief that there is no greater purpose than to help make our world a better place. Through the performing arts and arts education, we’re committed to shaping our world into something remarkable.

Wharton Center for Performing Arts at Michigan State University occupies the ancestral, traditional and contemporary lands of the Anishinaabeg–Three Fires Confederacy of Ojibwe, Odawa and Potawatomi peoples. The university resides on land ceded in the 1819 Treaty of Saginaw. 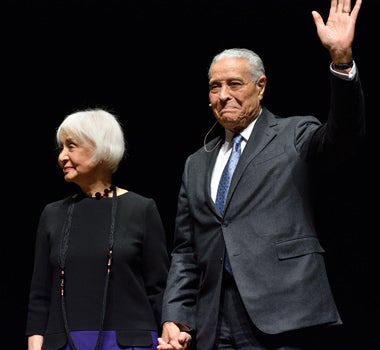 Dr. Clifton R. Wharton Jr. became president of Michigan State University in 1970. Wharton and his wife, Dolores, came to campus with a deep appreciation for the arts.

After 17 years as Executive Director, Brand announced his final season at Wharton Center, retiring by June 2022.