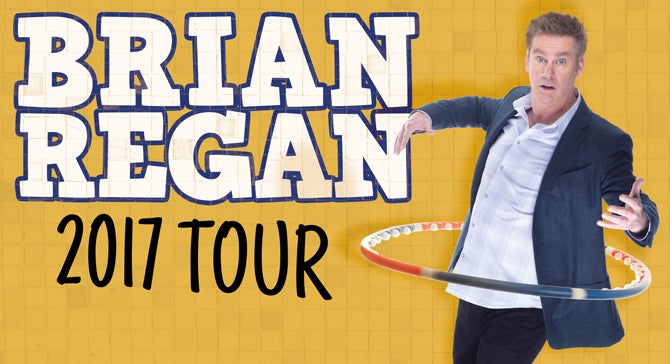 A regular on The Tonight Show Starring Jimmy Fallon, Regan made history on September 26, 2015 with the live Comedy Central broadcast of Brian Regan: Live from Radio City Music Hall, the first-ever live broadcast of a stand-up special in Comedy Central’s history.  The special was critically-acclaimed with Vanity Fair calling Regan, “The funniest stand-up alive”.

“He is one of my favorite, favorite stand-up comedians.” - Jerry Seinfeld

“Brian Regan is one of my favorite comedians ever. He is unbelievably funny.” – Jimmy Fallon

“You’re the guy people look up to…Brian Regan’s the funniest guy…there’s Brian Regan and then there’s other people.” – Marc Maron

Regan made a scene-stealing cameo in Chris Rock’s film, Top Five, and he was seen in Seinfeld’s Comedians in Cars Getting Coffee, but it is stand-up comedy that is Brian’s focus visiting close to 100 cities each year, and selling out some of the most beautiful venues on the continent.