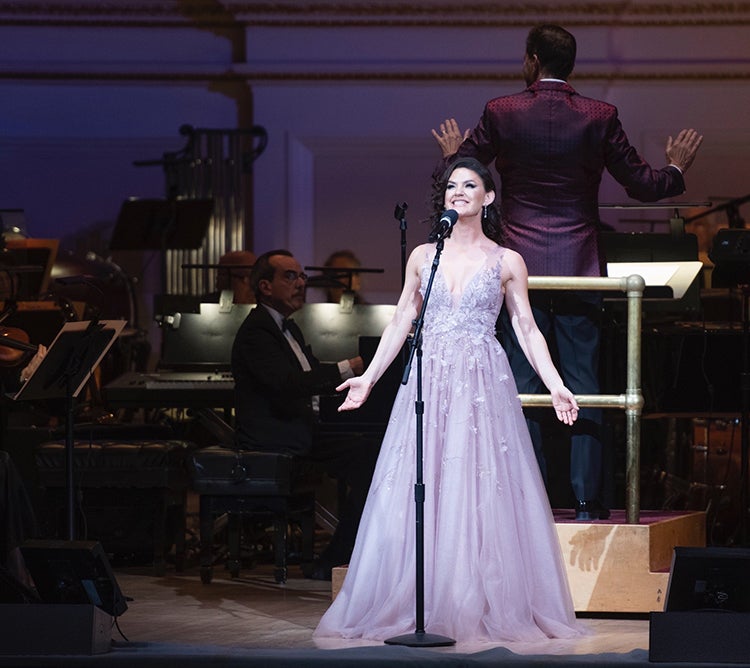 Join Carrie Manolakos for a performance featuring some of her favorite songs and her living room piano.

“And there is that 'voice’ which is just phenomenal and takes you to another place. When Carrie Manolakos sings, it’s impossible not to feel it. She takes the audience on an emotional journey. Carrie has devoted her whole life to music, acting and writing, and has managed to be equally compelling authentically sharing herself, her voice and her music as she is acting in roles both new and known.” —Gemma Magazine

Carrie Manolakos is a Broadway star, actress, writer, and recording artist best known for her roles on stage, including Sophie Sheridan in Broadways Mamma Mia! and Elphaba in the National Tour of Wicked. Carrie can also be heard as a voice on The Greatest Showman and Incredibles 2, and her live interpretation of Radiohead’s Creep became an international phenomenon nearing 4 million views and counting. In 2019, Carrie released a full-length solo record, The 44th Chord, which was featured on Z100 with Celine Dion, Madonna, Katy Perry, and Ariana Grande. She released her debut solo record, Echo in 2012 which reached #44 on the iTunes Pops Charts.

Carrie Most recently performed Carnegie Hall in February of 2020, to a sold-out crowd. She sang the songs of her heroes and her own original material, receiving a standing ovation for her performance. Other special guest performances include Madison Square Garden with Phish for their highly anticipated New Year's Eve Extravaganza and the Metropolitan Opera with Hugh Jackman.