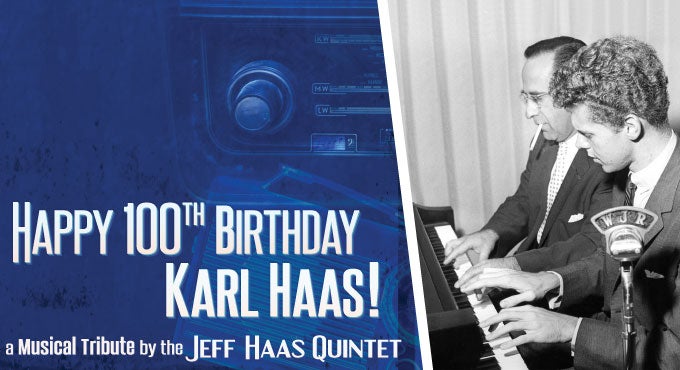 From arrangements of Karl Haas’ favorite works by Beethoven and Schumann, to Cole Porter, Thelonious Monk and more, it’s an afternoon for music lovers of all stripes, along with engaging stories about how Karl, a German Jewish immigrant, changed the musical landscape of the Motor City and the rest of the country during the 44-year run of Adventures in Good Music, the most popular and widely distributed classical program in the history of radio. The elder Haas remains the only classical music host to be
inducted into the Radio Hall of Fame. Karl was one of two radio personalities to
receive two Peabody awards, the other being Edward R. Murrow.

Jeff's music is known nationally, and also came to the attention of legendary jazz pianist Dave Brubeck who said, "In combining these great musical traditions, [Haas] has created a soulful music that transcends ethnic barriers.”

The Detroit Free Press referred to Jeff Haas’ recording, The Bridge Lives, as "extending backward to his familial and religious roots and extended forward to his burgeoning career as a jazz musician. Haas’ blend of jazz, classical and Jewish music offers a path lit with originality." Iconoclast jazz master Ahmad Jamal praised Jeff for "the depth of his compositional effort and the inspired use of the universal language of music.”